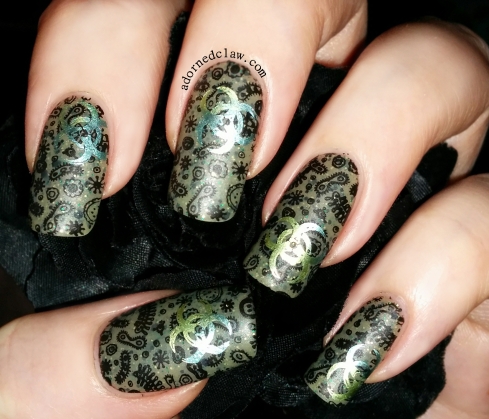 Ugh I’m still ill! So far this year I have only felt well for around half a day (yeah, I know there have only been six days of this year so far)

So here are some “I’m Ill and feel like poop” nails. 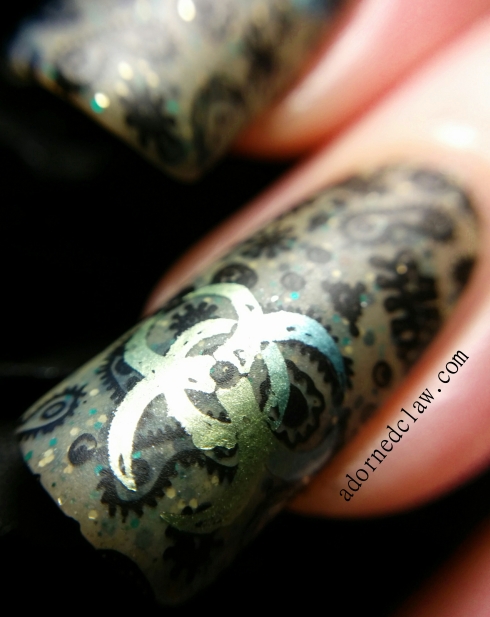 The base colour is Zombie Flesh from Dollish Polish. then I used Plate MM25 along with Hit The Bottle Black for the microbes.

The Bio hazard symbol is from Bundle Monster BM-418 I used Aglaia and Arete both from the 2true Metallica Collection. I did start off trying to line them up, but that didn’t really work.

I finished it off with a layer of Seche Vite then a coat of Illamasqua Matte topcoat.

I’m going to go back to being wrapped up in blankets on my sofa!

I hope you are having a much healthier week than me! 🙂

I realized that I haven’t created any candy corn nail art this year oO so here are some Candy Corn Coffin nails! 😀 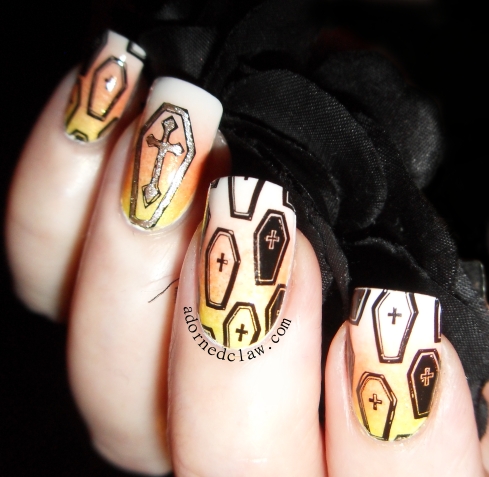 That random bit of thread is really annoying, the more I look at it, the more it looks like a creepy spider leg

The polishes and other stuff I used are

Starting with a white base I used Lite, Shirley Temple and Snow Me White for the gradient, then using Hit the bottle black for the coffins.

The little coffins are from Plate MM11 the larger coffin is from BM-402. then using a tiny brush I added the gold detail with Antiquated.

Then finished it off with a layer of topcoat!

I hope you have a lovely Halloween weekend! 😀 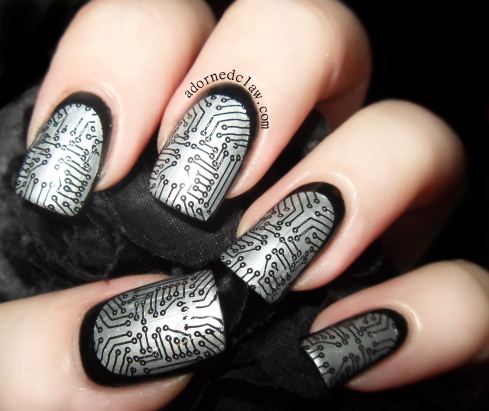 Today I have been inspired by Robots!… Well not so much robots but pretending to have robot fingers while I was using the foil method to take off the glitter from my last mani lol!

so I decided to have a go at stamping over a ruffian.

For this I used

Starting with a base of Barry M black, I then applied Moonstruck over the top. When it was dry I tidied up the edges with the black nail art pen.

For the stamping I used Konad SP black and my marshmallow stamper, I had a bit of difficulty with the image, I think it’s because it’s not etched very deeply… Ugh it was a pain

But after a lot of swearing and repeatedly using tape to remove the image when it went wrong, (which it did, a lot) I eventually got it finished. 🙂

Hi Everyone 🙂 Here are my delicate print nails for day 15!

I decided to use one of my untried Sinful Colors polishes today, This one is called Sugar Sugar, it’s an amazing intense shade of red with a smattering of red glitter, and a slight golden shimmer.  I don’t often really like red polish, But this one is definitely an exception!

The stamp is BM-405 from the Bundle Monster CYO set. I had a little problem with the BM plate, My nails are too long oO in particular my thumb nails… There was about 4mm of gap! And the gap was around 2/3mm on my other nails, But not to be deterred I had a cunning plan to continue the pattern with My Barry M Nail art pen, I think it worked! 😀

There was some shrinking and cracking from my topcoat… After my really careful drawing of the unstamped bit of nail, I’m just going to pretend I can’t see it!

Other than my wobbly freehand skills I really like how this looks, I think next time I might try silver stamped over black or grey! 😀

Today I have some very Anti Valentine’s day nails to show you!

I don’t think I could have made this any less valentine’sy!

I started out with two coats of Pumice From Sally Hansen, then using a make up sponge I applied patches of Pure Midnight which is also a Sally Hansen Polish.

Then I used a combination of cling film and tiny bits of sponge to add Barry M Grey, China Glaze Galactic Grey and Color Club Shabby Drab to create the stone effect.

I used two Bundle Monster Plates BM-426 and BM-413 for the stamping, I used Konad Special Polish in Black, then with a thin brush I added some Lumin-iceant from Color Club to the letters.

I also used Lumin-iceant for the stamping on my thumb, unfortunately it doesn’t show as well as I would like 😦

I finished it off with a coat of Seche Vite, but then decided it would look better in matte so I added a coat of Matte Finisher from E.L.F!

I think that’s enough hate nails from me! And I hope you have a lovely Valentine’s day what ever you are doing! 🙂

Here are my Valentines day nails for todays got polish challenge! I have to say I’m really not into the whole Valentines day thing, I find it all far to commercialized and a bit cheap… But enough of me grumbling lol!

I started out by making the little stamped decals using Bundle monster BM-401, for the stamping I used Konad special polish in black.  Then color club ulterior motive for half of the hearts and Maybelline Flash Cosmic with a coat of Barry m shocking pink over the top for the rest.

While I was waiting for my decals to dry I used Sinful Colors Bubbly and Barry m shocking pink to create a sponged gradient, Bubbly is a polish from my unused pile along with the Maybelline glitter polish. Then I stamped with China Glaze Cosmic Dust using Moyou Pro Collection XL plate 04 for the leopard print.  I used topcoat to stick on the decals, and added a few dots of Ulterior motive. then another layer of top coat to even it all out! 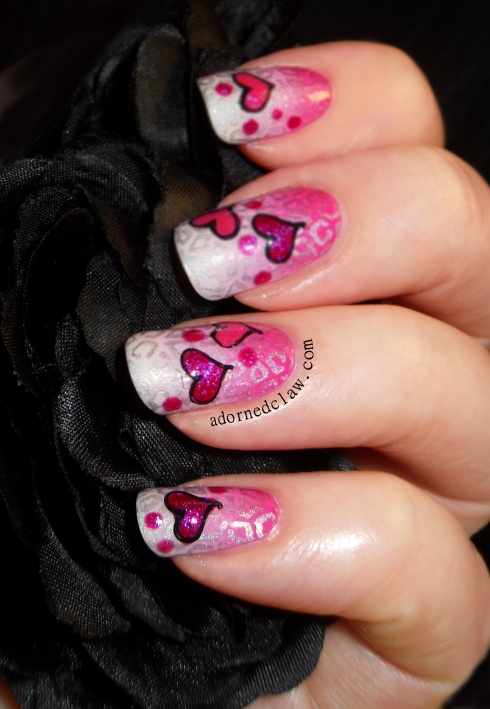 This didn’t turn out quite how I was expecting! But for pink and girly it’s not that bad….

Remember to have a look at the GOT polish Pinterest page for more Valentine’s Day nail art!