Today I have some very Anti Valentine’s day nails to show you!

I don’t think I could have made this any less valentine’sy!

I started out with two coats of Pumice From Sally Hansen, then using a make up sponge I applied patches of Pure Midnight which is also a Sally Hansen Polish.

Then I used a combination of cling film and tiny bits of sponge to add Barry M Grey, China Glaze Galactic Grey and Color Club Shabby Drab to create the stone effect.

I used two Bundle Monster Plates BM-426 and BM-413 for the stamping, I used Konad Special Polish in Black, then with a thin brush I added some Lumin-iceant from Color Club to the letters.

I also used Lumin-iceant for the stamping on my thumb, unfortunately it doesn’t show as well as I would like 😦 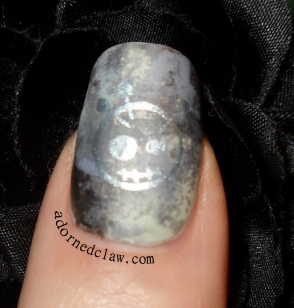 I finished it off with a coat of Seche Vite, but then decided it would look better in matte so I added a coat of Matte Finisher from E.L.F!

I think that’s enough hate nails from me! And I hope you have a lovely Valentine’s day what ever you are doing! 🙂