Glow in The Dark Flames!

Hey everyone!
It’s been a while ( and by a while I really mean months… Ooops) since my last post.

I really needed a break from everything! I have had a lot of stuff going on that in all honesty has been simultaneously boring and stressful! But I’m not going bore you all with the details!

I really think these would be great for Halloween!

The stuff I used

I used the Models Own and Sally Hansen Polishes to create a gradient, I think using some white undies would have saved me a lot of layers!

Then I added the glow in the dark polish the ones I used are just cheap Pound shop unbranded ones but they do glow reasonably well, I think using some better quality glowing polish would improve this a lot.

Then when It was dry (this took ages) I used MM27 and Hit The Bottle Stamping Polish to add the flames!

Then a coat of Seche Vite and a bit of a clean up to finish it off.

Even if it is orange and yellow this mani makes me really happy! 😀 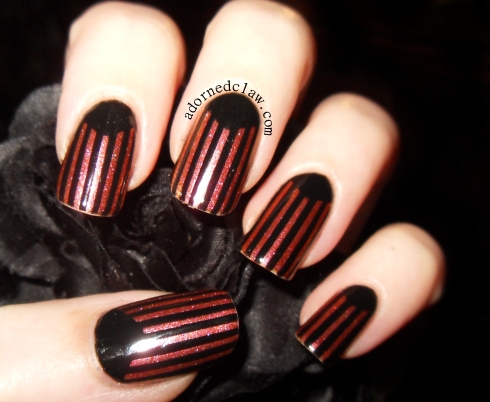 Black and Glittery Half Moon Nails

For this I used two coats of Sally Hansen Lava from the Lustre Shine collection, Filthy Gorgeous Twilight, quite a lot of striping tape and some french tip guides (I used the pointy shaped ones rather than the round ones!)

Even though this took a quite a while, the striping tape was not cooperating, I really like this look, and I’ll definitely have to try this with different colours! 😀

For this mani I used 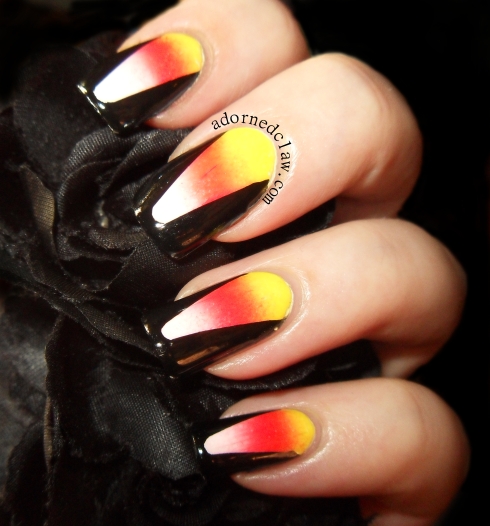 After my first coat of white polish had dried I used Hot Chilli Pepper, Sunny Days and Ivory Skull to create the gradient, it too ages! It took four layers of sponging to get the colours blended nicely.

The orange polish has a lot more pigment than the yellow so I found (out the hard way, this is my second attempt at this gradient the first was a tragic failure,) that only adding around quarter of the amount of orange polish to the sponge was the only way to stop it from spreading too much.

After my gradient had dried I added a coat of Out The Door… I have to admit I’m starting to miss Seche Vite, but that’s something for another post! When that had dried I used striping tape to create the triangular candy corn shape then carefully painted on a couple of coats of Liquid Vinyl and removed the tape!

I used my trusty Barry M nail art pen to curve the tips of the triangles, then finished it with another layer of top coat. 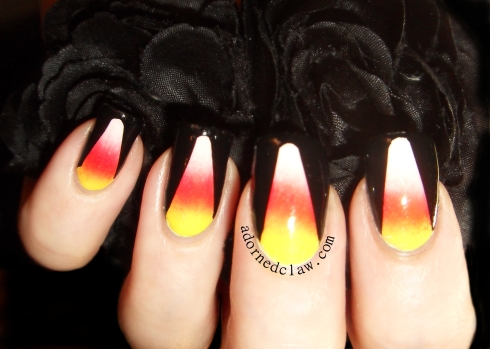 This mani also covers one of this weeks prompts for the pick and mix challenge! Which is a three colour gradient, I’ll have to see if I have time to do the other prompt later on this week 🙂

Hello! I have pumpkins to show you today! I finally managed to grow some this year 😀 and I’m celebrating with pumpkin nails!

I’m sure it’s not too early for Halloween nails! 😀 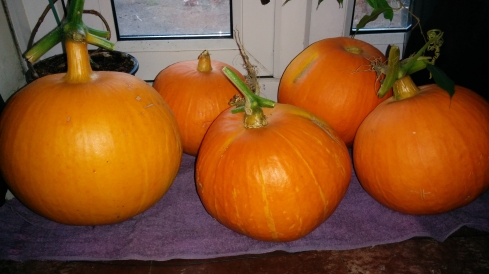 Here are my pumpkins! 😀 Apparently I have to leave them to cure, until the stems are all dry and fall off! I better find some nice recipes!

The sparkly orange polish I used is called Shirley Temple and that’s from the Cocktail Colour collection from Rimmel London, it took three quite thick coats until I was happy with the coverage. Even tho I’m not the biggest fan of orange nail polish but this actually doesn’t look too bad it could be the glitter or maybe it’s the Halloween stamp lol!

The pumpkin image is from Messy Mansion plate MM22. 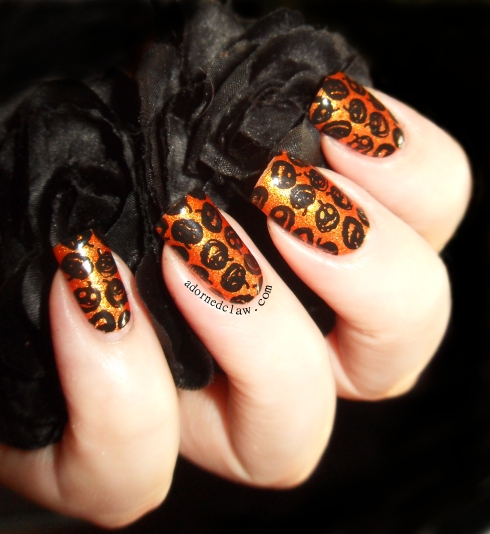 After editing the photos and writing my post I have only just noticed that my ring finger nail the stamp is the wrong way round! Ooops!

As I don’t actually own any “orange” nail polish, I decided to use the same polishes from my GOT polish challenge orange water marble mani, you can find that Here.

I started with a couple of coats of East Austin from Color Club, then using the cling film technique I applied Roguish Red from China Glaze. to make the orange coloured background.

For the bats I used Konad SP in black with plate 10 from the Moyou Suki collection.

I finished it off with Color Club topcoat, there is a little bit of shrinking but it’s not too bad. 🙂

I don’t really like orange nail polish, so I don’t have that many (by not many I actually only own two and I got those recently)… so I used the most orangey colours I have that meet the rules for the GOT polish challenge!

I used Roguish Red from China Glaze… it’s a very orangey red, it’s probably why I haven’t used it very much, it being to orange, it’s from the 2012 Halloween collection. The other polish I used is called East Austin and that’s from Color Club, it’s a light bright pinky orange, and it’s been sitting unused in my nail polish box for quite a while!

I tried out a lot of techniques with these polishes and none of them worked well, both of these polishes are rubbish for stamping, then I tried a gradient but the color club polish ate my sponge oO so that was a massive fail, and the polishes on their own aren’t orangey enough… I was about to give up on the challenge for this week. 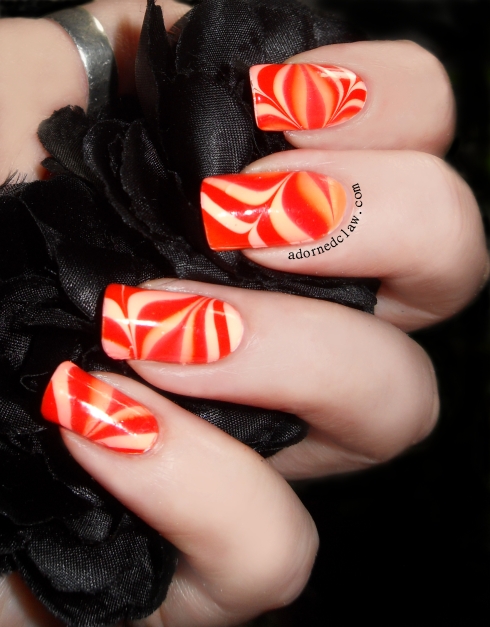 I may have forgotten to tape up my fingers… So the clean up was an absolute pain lol!

the challenge for this week was a pain in the butt for me but it turned out well in the end 🙂 I just hope that the polishes I used are orangy enough! 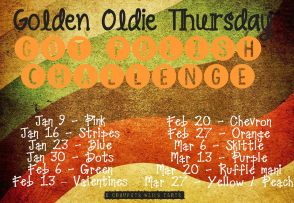 Don’t forget to have a look at the GOT polish Pinterest page. you can find that right Here.